On its surface, Netflix’s Tiger King shows barefaced the decay and illusion of the American Dream. Joe Exotic, the Tiger King, struggles to keep up with the costs of running his zoo, he hires desperate labourers who are grossly overworked and criminally underpaid, and he has fully internalized the fetishized idea of private property in America, reigning king in his Tiger World, where he is the judge, jury, and, at times literally, executioner. Joe’s illusion of success is built on a fragile foundation of debt and exploitation, primed to come crashing down when faced with the smallest of obstacles.

False consent and the zoos

The oppression Joe Exotic inflicts on his workers is staggering at times, going beyond the mere financial dependence present in other forms of work. Joe forces some of his employees, who are straight men, into gay relationships in order to have their physical needs met (housing, food, income, drugs). This surpasses our idea of coercion and starts to challenge our notions of consent. Verbal and physical consent mean absolutely nothing in a relationship with such a severe power balance, because there are no foundations for consent to be built on.

And this situation is not unique to Joe Exotic. Joe’s idol and fellow zookeeper, Bhagavan “Doc” Antle, grooms teenage girls by enticing them with an exciting life full of baby tigers, takes their virginities, and cements himself as the sole provider of their physical needs. In both Joe’s zoo and Doc’s zoo, there is a power dynamic and obedience reminiscent of the feudal era. 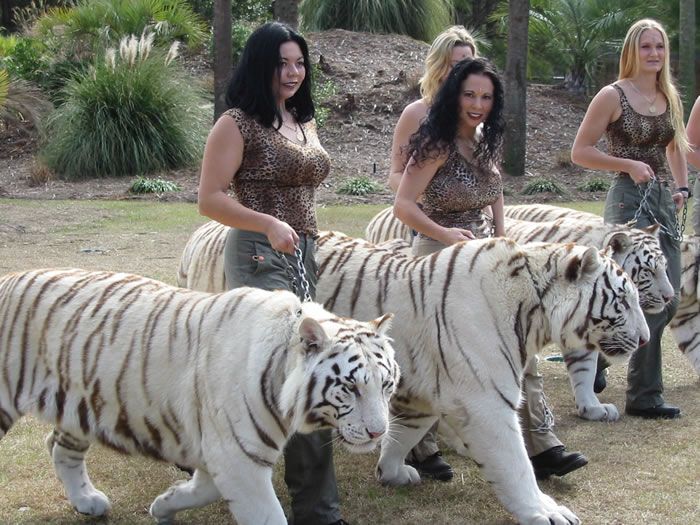 Looking at this phenomenon of false consent at a larger scale, we can see it everywhere, from almost every employee-employer relationship, to romantic relationships and family structures where one or more members depends fully on another in order to have their physical needs met. This false consent is violent by its nature, and it has the potential to be violent even without any explicit physical violence present.

Imagine a situation where, for example, a woman is completely financially dependent on her husband. Imagine that the husband does not physically abuse her and is not overtly violent to her in any way, he merely ignores her. In this situation, she is completely trapped even though consent is present and there is no explicit abuse. Similar comparisons can be drawn to people living paycheck to paycheck – there doesn’t need to be a brutal boss, the violence of this power dynamic is implicit. The consent in these types of relationships is a false consent, just like the consent in the zoos. Beyond this notion of false consent, there is a more interesting ideological reading that can be pulled from the antagonism between Joe Exotic and Carole Baskin (an animal rights advocate who, along with her sociopathic husband, runs a tiger sanctuary and plays the role of Joe’s nemesis).

In this relationship, Joe Exotic represents the mask-off ideologue, whose intentions are laid bare for all to see. He breeds tigers for money, he takes advantage of desperate people, he coerces straight men into sex, all of this he’ll boldly admit to before you even ask. In this way, he is like the conservative politicians of today, who proudly pledge allegiance to the free market, private property, and the wealth inequality these things produce. They openly serve the interests of capital and claim that, like it or not, the system they are perpetuating is the best one possible and the only one worth pursuing. These are the honest enemies, the ones who are easily identifiable and, for this reason, it makes them preferable enemies to what Carole Baskin represents.

Because Carole, on the other hand, Carole is trickier. On the surface, she is Joe Exotic’s antagonist – an animal rights activist who fights tooth and nail to get operations like Joe’s shut down. She presents herself as a benevolent hero, wishing only to do good and to protect tigers at all costs. Her goal is to shut down zookeepers like Joe Exotic and save the animals inside, presumably bringing them into her sanctuary and expanding her operation.

In reality, she is a brutal free marketeer, and to even more of an extent than Joe Exotic. Her zoo, called Big Cat Rescue, brands itself as an animal sanctuary, but the place itself is terrible – cramped cages, overgrown weeds, miserable looking tigers. The conditions are objectively worse than at Joe Exotic’s zoo. Carole’s zoo also has a non-profit status and her do-gooder animal rights image attracts an army of volunteers who proudly labour for free, all of this despite the fact that the zoo pulls in a massive income from donations, ticket sales, social media (they have a large online presence), and branded merchandise. By shutting down zoos like Joe’s and taking his tigers, her operation can grow bigger and bigger. Take away all the rhetoric and branding and Carole is exactly what she claims to fight against – a zookeeper making money off of the exploitation of animals.

In this way, Carole Baskin is like our liberal politicians, who are out to do good and “make things right” by urgently fighting “evil.” They will openly criticize the class, race, and gender inequalities caused by capitalism and will present their own solutions – “give us the power, give us the money, and we will make it right. Through our benevolence and philanthropy, we will be the righteous managers of capital.” But when you strip away their false antagonism, they are also zookeepers. And they are ruthless zookeepers who will crush their competition under the guise of morality.

Identify your enemy and attack them ruthlessly

Carole and her liberal counterparts are, in fact, our biggest enemies. They are masked ideologues, out to deceive us in order to get their way. As Carole pretends to fight against zoos, liberals pretend to fight against capital. But the truth is that, in essence, Carole sells a zoo with a human face while liberals sell capitalism with a human face. And when we strip away the morally superior rhetoric, the material conditions remain the same – an exploitative zoo and an exploitative economic system with a built-in oppressive power dynamic full of false consent and other terrible things.

This is why the mask-off ideologues, like Joe Exotic and Doc Antle, loathe Carole and her fake animal sanctuary. She is their biggest competitor in the free market and her tactics are extremely effective. Her hunger for market domination knows no bounds, with her tentacles stretching into politics and law, filing lawsuits and arresting other zookeepers and using political partnerships to shut the other zoos down. Her army of unpaid volunteers, mostly young upper-middle class women and girls, is much larger than the poorly paid workforce of Joe and Doc (who, contrary to Carole’s workforce, are mostly working class folks and transients). Carole’s volunteers also share her cynical goals, except they’ve fully internalized the rhetoric and branding. They truly believe that their operation is somehow different than Joe Exotic’s. Carole reminds me a lot of failed president Hillary Clinton, and Carole’s supporters, like Clinton’s, are the perfect foot soldiers for capital – they kill for free and with a smile on their face, smug and completely oblivious to what they’re doing.

This is why, symbolically, masked ideologues like Carole Baskin (and the liberals she represents) need to be killed, as Joe Exotic’s instinct correctly guesses in the movie. They are the first enemies we need to crush because they drain liberatory movements of their energy by funnelling popular desire for change into a machine that perpetuates the same oppressive forces and pushes their competitors, the mask-off ideologues like Joe Exotic, Doc Antle, and the conservatives, into a more and more chaotic and reactionary frenzy. The result is two terrible choices that recklessly keep the disintegration loop of capital going, slowly coming apart and perishing into dust.

My name is Filip Jackson, I'm a social critic, educator, and music producer born in Belgrade, Yugoslavia and living in Toronto, Canada. I have a MS in Education, specializing in Freirian critical pedagogy with a Marxist foundation. View all posts by Filip Jackson